My personal story on sleep is one of concern and guilt because of the invariable tendency of the prevailing literature is to emphasize that more is better but current Sleep Studies may say otherwise.

Also with emphasis on minimums of 7 hours. Whilst optimums are usually way beyond that! The message the public gets is “the more the better!”

My father naturally did not sleep for many hours.

Was able to party in the old British colonies to all hours.

In those days effective segregation from ‘locals’ achieved through ‘clubs’.

It may be called a cricket club, swimming club or golf club! But usually, each city or large town had one for the colonial ‘masters’!

His additional habit to snooze after lunch in an armchair for some 20 minutes!

This turns out to be an optimum maximum! As going into a deep sleep midday has usually negative consequences overall!

Mercola has immediately, maybe with a view to disclosure, latched on to Alexey Gurzey’s criticism of professor Matthew Walker.

I set out some of the literal comments below. It is almost a personal relief to see these openly debated! But the result generally is almost groundbreaking!

My personal overriding objective when it comes to sleep? It’s to watch Circadian Rhythm like a hawk!

Stick rigidly to time to rise and time to bed. This includes weekends!

My big caution is to try and have 3 hours interval from time last eating! Also, use techniques to limit that Glycemic rise!

Anything to even out and keep Insulin down! And of course, and so few of us achieve unless we have that puppy to look after. The quick walk that also helps to soften the hyperglycemia spike!

The popular and oft-cited book we are discussing: “Why We Sleep: The New Science of Sleep and Dreams,”. By professor Matthew Walker, Ph.D., founder and director of the University of California Berkeley’s Center for Human Sleep Science.

The combined research of 35 Sleep Studies tells us volumes.

He details many supposed benefits of longer sleep.

I’ve frequently referenced the contents of Walker’s book in a number of my previous articles about sleep. This is why I became more than a little curious when I came across the work of Alexey Guzey.

Alexey Guzey with more than 130 hours over the course of two months investigating the claims presented in only one chapter of Walker’s book.

Called “Why We Sleep,”  coming to the conclusion that the chapter, and kind of likely: the book may not be allegedly “riddled with scientific and factual errors.”

This Guzey highly critical and claims may convey the wrong impression respecting sleep.

We may actually require less, so long as it is the right kind. We may have to be hyper-cautious about getting too much!

As Mercola points out:

Guzey writes: “I hope that going through one full chapter, rather than cherry-picking stuff from across the book, demonstrated the density of errors in the book.”

Certainly, I believe optimizing your sleep is crucial for mental and physiological health. The evidence for this is overwhelming. The question is how much sleep one actually needs, and whether more sleep equates to better health and increased longevity.

Guzey’s findings contradict some of these assumptions.

In “Why We Sleep,” Walker states — without corroborating references — that “the shorter your sleep, the shorter your life span.” According to Guzey, this claim does not conform to findings in the medical literature, most of which show a U-shaped relationship between the length of sleep and longevity.

In other words, life span decreases at both ends of the spectrum, and Guzey cites three studies demonstrating this nonlinear association. He points out that “The studies typically find that people who sleep 7 hours have the highest longevity.”

The chart you see below is from an amalgamation of 35 studies done in 2016, published in Scientific Reports and illustrates the nonlinear impact of sleep duration on all-cause mortality risk.

The solid black line in the middle is the estimated relative risk, while the two dashed black lines on either side represent the 95% confidence interval. Guzey added the red dashed lines to highlight the lowest risk zone. 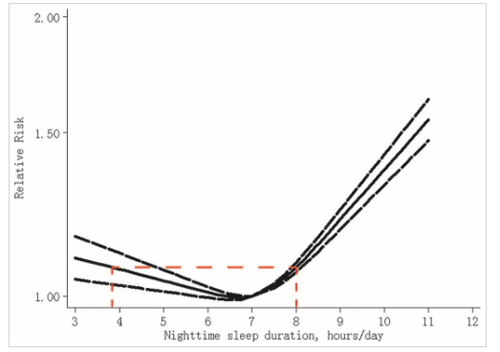 Based on this meta-analysis, the lowest all-cause mortality was just short of seven hours of sleep per night, with rates rising sharply after seven hours. The estimated relative risk (solid black line) actually appears to be near-identical at four hours and eight hours of sleep. Survive Sensational Sleep Studies! Now Uncovered Territory!